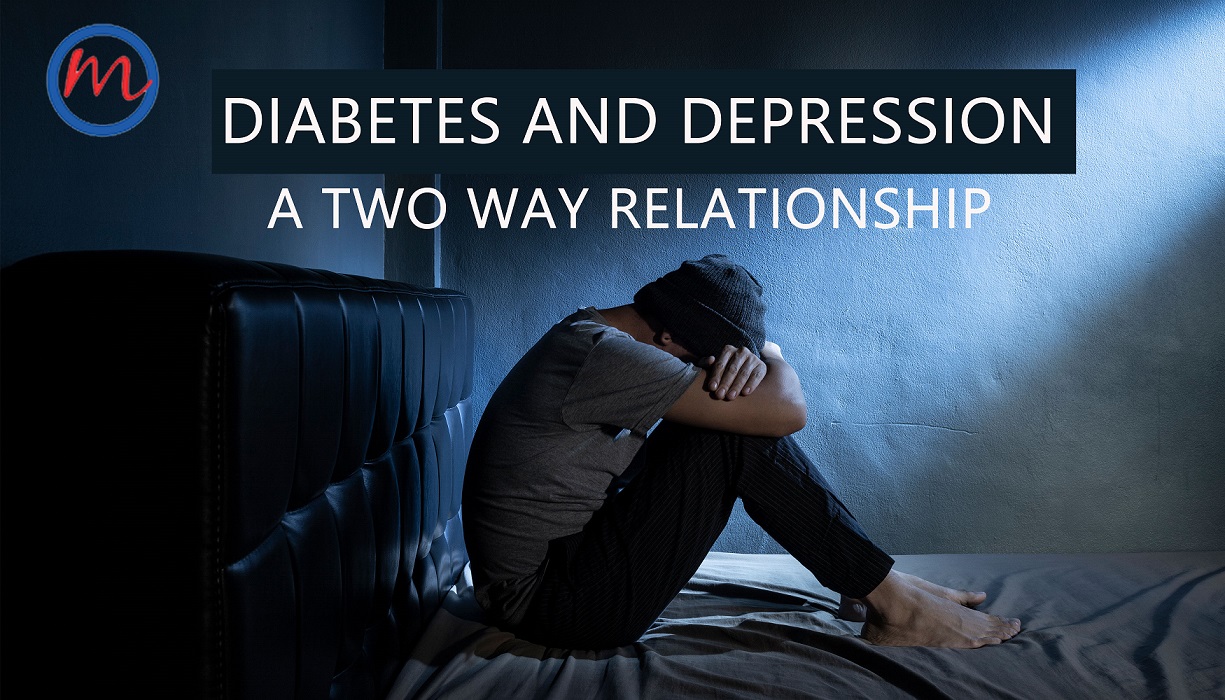 Diabetes is increasing in India:

Depression- Some facts you should know:

Another condition, which is very prevalent in India is Depression. An individual’s symptoms of depression can vary, but often the feelings include sorrow, loneliness, anger or irritability, binge eating, weight gain and lack of sleep  [Figure 1]

Depression influences your physical well-being, your thoughts and your feelings. People who are depressed usually stop doing things they once enjoyed, like talking to friends or getting projects done around the house.  Depression can feed upon itself, making you feel worse and worse. This ‘Downward Spiral’ is sometimes caused by stressful events or physical problems and is depicted in Figure 2.

Depression and diabetes: Is there a connection?

Prevalence of Depression in India:

According to the Chennai Urban Rural Epidemiology Study (CURES) conducted by us in a representative sample of 26,001 individuals in Chennai, 15% of the adult population in Chennai had depression. The prevalence rates of depression were higher in women, older people and those of lower social economic groups [5]. (https://pubmed.ncbi.nlm.nih.gov/19784380/) When divided according to their diabetic status it was seen that people with diabetes had higher prevalence of depression (20%) [6] (https://www.liebertpub.com/doi/10.1089/dia.2010.0081). Moreover, if they had longer duration of diabetes, the prevalence increased further and if they had complications of diabetes [7] (https://www.japi.org/t2c4e434/association-of-depression-with-complications-of-type-2-diabetes-the-chennai-urban-rural-epidemiology-study-cures-102). The prevalence of depression is  almost 40 – 50% of all people with diabetes and complications who had some form of depression [7]

Why does diabetes produce depression?

It is fairly well known that people with diabetes can have depression due to various reasons. The very diagnosis of diabetes itself can produce depression in some people because they think that they cannot eat their favourite sweets anymore. ‘There goes my ice cream!!’, would be the first thought which come to some people. ‘I cannot not eat chocolates anymore!’ ‘What about my favourite Gulab Jamun or Badam Halwa? . Is it to be given up forever?’ These thoughts itself are enough to produce depression in people who are fond of their food.

Apart from this, diabetes can produce depression due to many other factors. The need for poking themselves regularly to get their blood sugars and other tests done, the need for insulin injections (which need to be taken on a regular basis and several times a day by many patients), the need to do regular exercise, are all deterrents which can lead to depression. Even more serious is the situation when some of  the organs start getting affected. If the eyes, kidneys, heart, nerves, feet and other organs are affected, people may develop chronic depression. Diabetes also leads to erectile dysfunction and sexual disorders which can definitely lead to depression in many people.

The question therefore arises, ‘Is it possible that by controlling the diabetes the depression can also get better?’. Alternatively, ‘By controlling the depression, can the diabetes and the other metabolic conditions improve?’ This was first tested in the United States at the University of Washington, Seattle, where, the late Dr.Wayne Katon and colleagues pioneered the concept of the ‘Team Care’ approach. The Team Care  used non medical people to provide screening as well as counseling for people with diabetes and depression attending a diabetes centre. The results of the Team Care approach are widely accepted in the US.

In 2014, Madras Diabetes Research Foundation and the Emory University, Atlanta and the University of Washington at Seattle submitted a grant to the National Institute of Health (NIH) for testing out where the Team Care approach can be applied to a low and middle   income country like India. The  project was funded by the National Institute of Health, division of NIH with Dr.V.Mohan as the Principal Investigator  from India and Dr.Mohammed Ali as the Principal Investigator from US, along with Dr. K.M. Venkat Narayan and Dr. Shivani Patel  from Emory University; Dr. Lydia Chwastiak and Dr.Deepa Rao from the University of Washington,Seatle and   Dr. R.M. Anjana & Dr. S. Poongothai from  Madras Diabetes Research Foundation as Co-PIs.The project was called the INDEPENDENT STUDY (INtegrating DEPrEssioN and Diabetes treatmENT).

The study involved 4 centres in India, 1) Dr.Mohan’s Diabetes Specialities Centre, Chennai; 2) Diacon Hospital, Bangalore (Dr.SR Aravind) 3) Endocrine and Diabetes Centre, Visakhapatnam (Dr.G.R.Sridhar) and 4)  All India Institute of Medical Science, New Delhi (Dr.Nikhil Tandon). Thus, there were 3 private centres and one large government centre. The idea was to see whether the team care approach could be replicated in India. Care coordinators were trained. Graduates working in these diabetes centres who could be either dieticians or diabetes educators or social workers were specially trained to conduct interviews to do motivational counseling and behavior modification. Using a computer assisted program, the control of diabetes, blood pressure and cholesterol levels were monitored. The study was done in 2 groups of people, those who had the extra support of care coordinators to screen and to counsel for depression were called as ‘Intervention arm’ and the other arm called the ‘Control arm’ consists of individuals who received routine care at the diabetes clinic. The results were very encouraging. Compared to 54% of individuals in the control arm, who improved the depression scores and saw improvements in the metabolic control, sugar, BP and cholesterol, 72% of the intervention arm were able to achieve improvement. The extra 18% improvement that was seen in the intervention arm, was because of the collaborative care approach used.

Figure 4 shows our advise for Collaborative Care of diabetes and depression at a diabetes centre. The beauty of the project was that only very simple tools were used to screen and therefore the project is replicable as well as can be scaled up even to  rural areas in India and to other low and middle  income countries in Africa, Asia and other parts of the world. The paper was published in JAMA on 18th August 2020 (https://jamanetwork.com/journals/jama/article-abstract/2769466)

Figure 4 : Recommended screening and treatment of  depression in a diabetic clinic

What did we learn from the INDEPENDENT study?

Figure 5 shows how the integrated care for Diabetes and Depression can be adapted [8]. (https://www.japi.org/u284a4/epidemiology-of-depression-and-its-relationship-to-diabetes-in-india)

Click here to view the video:
Diabetes and Depression – Is there any connection?

Towards Precision Medicine in Diabetes