Need Help? Every day, 24 hours
Dr. Mohan's Diabetes Specialities Centre > Blog > Blogs > WHAT IS DIABETES – An A to Z to make life easier for patients 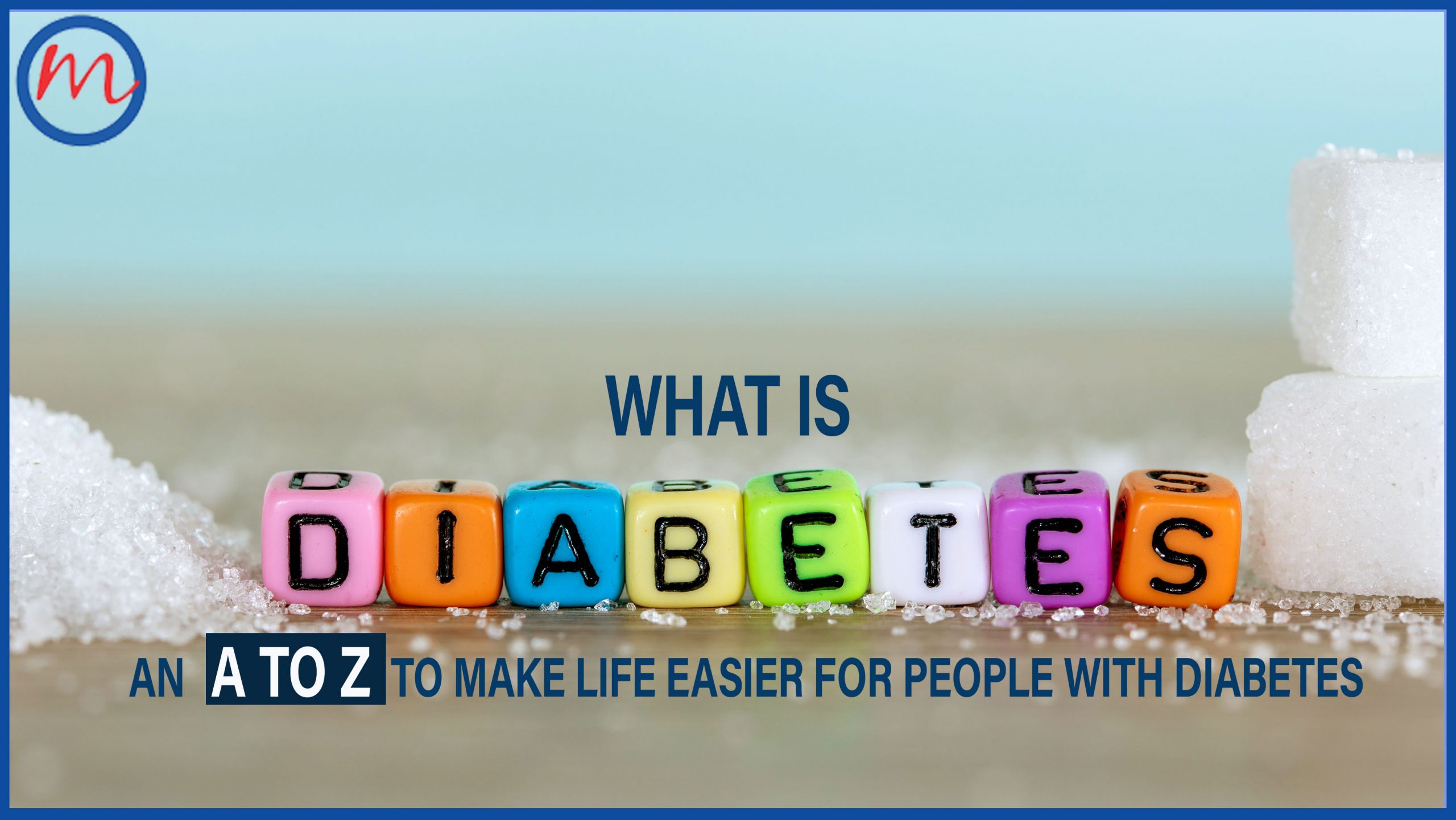 Put very simply, diabetes is a disorder in which the body cannot control sugar levels in the blood. The term diabetes is a short form of diabetes mellitus. Diabetes means ‘to pass through’, in Greek. And mellitus comes from Latin, meaning ‘sweet’. Hence diabetes mellitus refers to the sweet urine that people with diabetes pass. That’s why it’s often called the sugar disease. For some patients especially if control is poor, however, there is nothing really sweet about diabetes. It’s a long-term, debilitating disease, that has almost no cure. It can only be managed.

Diabetes is a complex disease. The “classic” signs with which people visit their doctors, generally include: excessive thirst, frequent urination, blurred vision, numbness or tingling of extremities, weight gain and fatigue. Although about 85 per cent people get type 2 diabetes, scientists now say diabetes is actually several clusters of diseases, with significantly different characteristics. For easy understanding, here is an A-Z of Diabetes—to clarify basic points and the most common questions asked by patients.

A FOR ADDICTION TO SUGAR

It turns out that extremely sweet or fatty foods captivate the brain in much the same way that cocaine and gambling do. One can become a sugar addict.

B FOR BEFORE DIABETES

Or Prediabetes, meaning when blood sugar level is higher than it should be but not high enough for a doctor to diagnose diabetes. Without intervention, it’s likely to progress to type 2 diabetes within 10 years.

C FOR FOR CURE

The bad news is, there is no cure for diabetes. If left untreated, it can bring a universe of complications that can even be fatal: blindness to amputations, kidney failure to elevated cholesterol, hypertension to vessel damage, heart attacks to strokes. The good news is: diabetes easily diagnosable, preventable and manageable and along and healthy life even upto 100 years of age is possible.

Newer drugs are appearing every day. And they are all available in India. Unlike the old drugs, they don’t cause risky drop in blood sugar, help in preventing weight gain and can reduce risk of heart and kidney diseases, the biggest killers in diabetes.

An explosive increase of diabetes has taken place in India. In the last three decades, it has gone up by nearly 40 per cent in adults above age 20. Today, it is one of the top 10 most dangerous diseases afflicting the population.

Glucose is the word for sweet in Greek. Today, glucose stands for the type of sugar one gets from food, and which the body uses for energy. As it travels through bloodstream to cells, it’s called blood glucose or blood sugar in layman’s terms.

More than stroke, heart attack, kidney transplant, nerve damage, or loss of vision, what puts people in the hospital most often is a foot infection. It’s largely under-reported yet one of the most serious complications of the disease.

Insulin is a hormone produced by the pancreas, that moves glucose from the blood to the cells for energy and storage. One gets diabetes when the pancreas does not make enough insulin and/or the cells do not respond to insulin normally. The discovery of insulin in 1921 by Canadian doctors—Frederick Banting and Charles Best—transformed diabetes into a disorder which allows one to live a long and productive life.

Commonly called Type 1 diabetes, it is usually diagnosed in children and young adults, although it can occur at any time. In this diabetes, the body attacks itself and destroys own insulin-producing cells. Hence, there is no insulin in the body, to deliver glucose to cells. People with type 1 diabetes must use insulin, to manage their diabetes.

Diabetic ketoacidosis is a serious medical condition that can result from very high levels of ketones in the blood which can even result in diabetes coma, if untreated.

Improvement in the medical device industry now allows accurate and inexpensive tests for monitoring blood glucose at any time. Most importantly, the glycosylated haemoglobin A1c (HbA1c) test, that can streamline monitoring the average blood sugar levels for three months) has now emerged as a gold standard.

M FOR MANY TYPES

Researchers are now talking not just about type 1 and type 2 but many more types of diabetes. For instance, type 3 (when brain neurones do not respond to insulin); Maturity Onset Diabetes of the Young (abnormal insulin secretion due to mutation in a single gene); Neonatal Diabetes Mellitus (in the first six to 12 months of life, again due to mutation in single gene) etc.

Diabetes can damage the nerves and cause a complication called neuropathy. This generally begins as loss of sensation in the toes, and possibly fingers. If left untreated, neuropathy can involve the whole foot which becomes totally denied of sensation.

It is the biggest enemy of diabetes. The more fatty tissue one has, the more resistant the cells are, to insulin.

These are: being overweight or obese; having a family member with diabetes; having high blood pressure; abnormal cholesterol; being physically inactive

It was once assumed that desserts and sweets raise blood sugar levels faster and higher than fruits, vegetables or “starchy” foods, such as potatoes, pasta or whole-grain bread. New research on diabetes nutrition shows total carbohydrates especially refined carbohydrates are what counts as they add to the ‘Glycaemia Load’.

When blood sugar is not controlled, blood becomes dense and thick, making one thirsty all the time—as kidneys work harder, driving one to the washroom on and off. As sugar levels rise further, one needs insulin injections to stay alive.

Too much sugar is corrosive, like battery acid, in blood vessels. As blood turns thicker and syrupy with sugar, it scars arteries and veins—the reason why people with diabetes often end up with heart, brain and kidney damage.

The damage of diabetes depends on how old a person is. In younger people, vision problems, foot ulcers, kidney diseases and skin conditions are more common. In older people, heart attacks and strokes arrive more quickly.

HEALTHY EATING DURING RAMADAN: Keeping A Tab On The Glycemic Load Of Foods