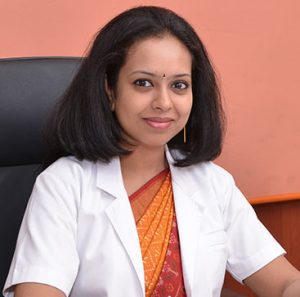 Dr. R.M. ANJANA, is the Managing Director of Dr. Mohan’s Diabetes Specialities Centre which is a WHO Collaborating Centre for Non Communicable Diseases Prevention and Control and IDF Centre of Education. She is also the Vice President of the Madras Diabetes Research Foundation, which is an ICMR Centre for Advanced Research on Diabetes. Her main research areas are prevention of diabetes, epidemiology, physical activity and translational research and metagenomics. She obtained her MBBS in 2002 first class with distinction and MD in 2007.

She has published over 250 papers in prestigious national and international peer reviewed journals. She has also participated and given lectures in several national and international conferences and programmes on diabetes, non communicable diseases and cardiovascular epidemiology. Dr. Anjana has received several awards to date from various national organizations including the prestigious Dr. Leela Krishnamoorthy Award from the Indian Association of Biomedical Scientists (IABMS). She has also obtained (ICMR) – Short Term Studentship in May 2000 from the Indian Council of Medical Research and also Kishore Vaigyanik Protsahan Yojana (KVPY) Scholarship from the Indian Council of Medical Research in 2001-2002. She has been conferred the “Boehringer-Knoll Junior Lectureship in Diabetes” for the year 2012 by the Association of Physicians of India (API). This award has been given to her for her research work on diabetes particularly in the area of epidemiology of diabetes. She has also been conferred the “Young Outstanding Women Achievers Award” by the Tamil Nadu Dr. M.G.R Medical University, Chennai (2012) and has been conferred the Young Innovator Award at the Indo-UK Diabetes Summit organized by Indo-British Health Initiative (IBHI) and the British Deputy High Commission, Chennai (2013) the Tamil Nadu Young Scientist Award by the Govt. of Tamil Nadu (2014), the E-MERCK Award (2015) for the best paper presentation at the APICON 2015, Gurgaon, Haryana and she has been conferred the Novartis Young Investigator Award in recognition for the research contribution to the field of Diabetes Complications by Research Society for the Study of Diabetes in India (RSSDI) (2015). In 2018, she has been conferred the Healthcare Excellence Award by Saveetha Dental College and Hospitals, Times Healthcare Achievers award (Stalwart Diabetes) by The Times of India, Kesavadev JPEF Award for the Young Researcher by the Diabetes India, the RSSDI Fellowship Award by the Research Society for the Study of Diabetes in India (RSSDI) and the Shakuntala Amir Chand Prize from the Indian Council of Medical Research (ICMR), New Delhi. In 2019, Dr.Anjana has been conferred the Indian Academy of Diabetes Award (Innovation Award) by the International Symposium on Diabetes in 2019,the Young Achievers Award in Diabetes by the National Congress on Clinical Diabetes and the Dr.V.C.Mathew Roy Memorial Oration by the Annual JPEF Golden Conversion. In 2020, she has been conferred the WIDF Applied Innovation Award by the International Diabetes Symposium and the K. V. George Kottukulam Memorial TANKER &amp; Kerala Kidney Research Foundation Young Investigator award by the Tanker Foundation. Recently, she has been conferred the Healthcare Personality Award 2020 by Medgate.

Dr.Anjana is the member of various national bodies such as Association of Physicians of India (API), Indian Medical Association (IMA) and Research Society for the Study of Diabetes in India (RSSDI), Indian Society for Pediatric and Adolescent Endocrinology (ISPAE), American and Association of Clinical Endocrinologists (MACE). In 2020, she has been selected as the member of the WHF Salim Yusuf Emerging Leaders Programme as a world-renowned leader in global cardiovascular disease (CVD) research.