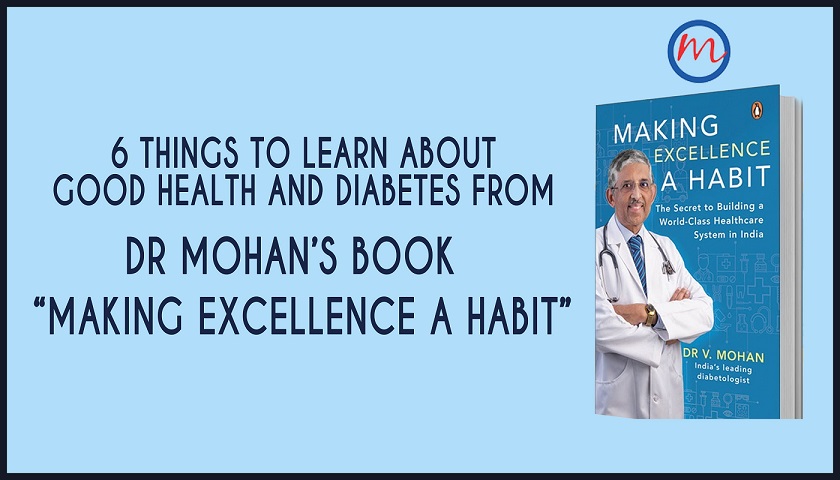 15 Great Life Lessons to Learn from Dr.V. Mohan, Diabetologist.
Excerpts From “Making Excellence a Habit: The Secret to Building a World-Class Healthcare System in India”

Diabetes healthcare runs in Dr Mohan’s genes. His father was one of the first diabetologists in India. Many of his immediate and extended family members are ace diabetologists or have pursued various branches of diabetes healthcare. One can only wonder at the collective knowledge of diabetes in his family, enriched by a large circle of friends and associates who are also diabetes clinicians, researchers, educators and philanthropists. Hardly a surprise, then, that in his autobiography Dr Mohan has revealed gems of insight and advice on diabetes, many of which appear in passing, as he takes the reader down the unique journey of his life. We have scoured, combed and rummaged through every page to bring you some highlights and quotes that, we believe, will intrigue, inform and inspire you, especially if you have diabetes:

THE FIRST DIABETES CLINIC IN INDIA

Did you know that a century ago, the idea of the diabetes clinic did not exist in India? Dr Mohan’s father, Professor M. Viswanathan, started the first diabetes clinic in independent India at the Stanley Medical College Chennai in 1948. A private institution devoted to a single speciality, such as diabetes healthcare, was unheard of in India even in the late-1960s and early-1970s, when he decided to shift his focus on building a private diabetes clinic. As Dr Mohan writes:

“That (the clinic at Stanley) marked the birth of the speciality of diabetology in India and earned him (Professor M. Viswanathan) the title of “Father of Diabetology” in India…”

100 YEARS OF THE DISCOVERY OF INSULIN

Exactly a century ago, a young Canadian surgeon, Dr Frederick Banting, along with a medical student, Charles Best, achieved the impossible until then: they isolated the active secretion of the pancreas, the insulin hormone. The discovery of insulin, which won the Nobel Prize in 1923, is one of the greatest scientific achievements of the 20th century, completely transforming the treatment of diabetes and saving millions of lives worldwide (for people with diabetes, the inability to produce enough, or any, insulin leads to a myriad of problems, especially high levels of sugar in the blood). Several best-sellers are out in the market on this fascinating real-life medical drama on the discovery of insulin and its early use. The pioneering scientists have also been Dr Mohan’s childhood heroes. Here’s a comment from his father that Dr Mohan recalls:

“Remember, Frederick Banting and Charles Best were young researchers when they discovered insulin. Why can’t you take up some research on diabetes?”

“From the second year of MBBS onwards, I had, due to my newfound interest in diabetes, already started reading quite a bit about the disease and was passionate about Banting and Best’s work.”

It is now well-established that South Asians are more susceptible to diabetes (type 2). And India is one of the hubs of the global diabetes epidemic. According to estimates released by the International Diabetes Federation, more than 77 million people have diabetes in India. But for years, the reason has remained a mystery.

In 1984, Dr Mohan and his, late Dr Rema Mohan, got the opportunity to work with world-renowned diabetes experts in London. The upshot was a remarkable study on insulin resistance among Indians (insulin resistance syndrome includes a group of problems like obesity, high blood pressure, high cholesterol, and type 2 diabetes).

“My studies in the UK showed, for the first time, that Indians have increased insulin resistance compared to matched groups of white Europeans.”

Even in the late 1990s, India or other developing countries had very few epidemiological studies of diabetes. Epidemiological studies investigate how often a disease occurs in different groups of people and why. The information is essential as a guide for managing people in whom the disease has already developed, as also for strategies to prevent it among those who haven’t. This led Dr Mohan to engage with the larger community to do research and saw the birth of several well-known studies, especially CURES (Chennai Urban Rural Epidemiological Study) conducted on 26,000 people. It provided extremely significant data on the prevalence of diabetes complications for the first time in any developing country, along with over 150 research papers in peer-reviewed journals—a record for a single research study in India, especially in the field of diabetes.

“(CURES) led to the development of a simple ‘Indian diabetes risk’ score that one could use to predict, with a high degree of accuracy, who was likely to develop diabetes within a community, even before a single drop of blood was drawn.”

THE CLOSE TIES BETWEEN STRESS AND DIABETES

It has now been proved beyond doubt that severe stress derails the metabolic balance, releasing a range of stress hormones–cortisol, adrenaline, non-adrenaline—in our body in large quantities. These hormones also work against insulin, countering its effects on blood sugar regulation.

“Doctors often make the mistake of not inquiring if the patient is under unnecessary or unusual stress while diagnosing them. It’s probably also because we don’t understand stress ourselves. When we see increasing sugar levels in our patients, we tend to blindly increase the dose of anti-diabetic medications without attempting to find the root cause and treating it.”

THE POWER OF POSITIVITY

With the emergence of Positive Psychology in the 21st century, scholars have pointed out that personality attributes such as hope, wisdom, creativity, courage, spirituality, responsibility, and perseverance have been ignored by scientists in health and healing. A decade later, there is a growing recognition that positive psychological orientation (especially, optimism and hope) influences health.

There is evidence that optimism motivates people to take proactive measures to protect their health, while pessimism is associated with behaviours that are adverse to health. Positive people are less likely to suffer from chronic diseases, generally, cope with diseases better and recover from surgery faster. A 2019 study conducted on postmenopausal women shows, positive personality traits helps reduce the risk of developing type 2 diabetes. Even in cancer patients, fewer negative changes have been reported in optimistic people.

Optimism is associated with enhanced mental health. An optimistic outlook, it has been proved, reduces the risk of developing hypertension and heart disease. Optimistic people also have a better immune system, longevity and a lower rate of death. In a 2006 study on the link between emotions and viral infections of the respiratory tract, scientists have shown that those with a positive personality style are less likely to develop symptoms than their less positive counterparts.

“I encourage all my patients—from those suffering from intractable migraines and headaches, body pain, abdominal pain, kidney disease or painful diabetic neuropathy—to support their healing with positive reinforcement and allow the power of the mind to help them achieve the desired results. And I continue to be amazed by the results obtained.”

WHAT IS MATURITY ONSET DIABETES OF THE YOUNG (MODY)